Vollebak, a sports gear manufacturer with an affinity towards using next-gen materials and technologies, is now selling (for 595 euros!) a graphene-enhanced jacket that according to the company, can perform functions like absorbing heat and then warming you up over time, conducting electricity, repelling bacteria, and dissipating your body’s excess humidity. 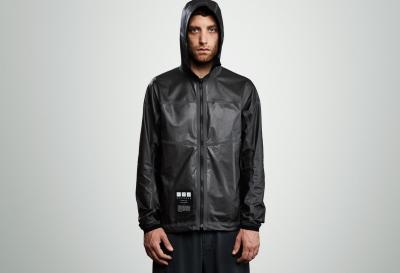 The process of developing Vollebak’s jacket, according to the company’s cofounders, brothers Steve and Nick Tidball, took years of intensive research. The jacket is reportedly made out of a two-sided material, which the company invented during the extensive R&D process. The graphene side is gray, while the other side appears matte black. To create it, the scientists turned raw graphite into graphene nanoplatelets (GNPs) that were then blended with polyurethane to create a membrane. That, in turn, is bonded to nylon to form the other side of the material, which Vollebak says alters the properties of the nylon itself. “Adding graphene to the nylon fundamentally changes its mechanical and chemical properties–a nylon fabric that couldn’t naturally conduct heat or energy, for instance, now can,” the company claims.

The company says that that the jacket is reversible so it is possible to enjoy graphene’s properties in different ways as the material interacts with either your skin or the outside world. “As physicists at the Max Planck Institute revealed, graphene challenges the fundamental laws of heat conduction, which means your jacket will not only conduct the heat from your body around itself to equalize your skin temperature and increase it, but the jacket can also theoretically store an unlimited amount of heat, which means it can work like a radiator,” Tidball explains.

The jacket can reportedly be left out in the sun, or on another source of warmth, to absorb heat. Then, the company explains on its website, “If you then turn it inside out and wear the graphene next to your skin, it acts like a radiator, retaining its heat and spreading it around your body. The effect can be visibly demonstrated by placing your hand on the fabric, taking it away and then shooting the jacket with a thermal imaging camera. The heat of the hand-print stays long after the hand has left.”

Vollebak also says the graphene layer will equalize your natural body temperature by redistributing heat from warm parts of your body to colder areas. The material disperses any extra humidity, too, and the jacket design itself contains no seams. Its pieces–which are laser-cut to avoid waste–are thermally sealed, instead. If moisture does end up inside, the graphene material will halt any buildup of bacteria since it can’t reproduce on its surface. In addition to being bacteriostatic, the company claims, the graphene layer is “hypoallergenic, anti-static, and certified as nontoxic”. The jacket also conducts electricity, although Vollebak had to reduce this property to make it safe.

Tidball: “The second stage of the R&D process, and possibly even more interesting, is the one that we’re starting now”. “By releasing the graphene jackets out into the world as experimental prototypes, our aim is to open up our R&D process and accelerate discovery by finally getting graphene out of the research labs and into the field.”

The hope is that once people get their hands on the jacket, they’ll start experimenting with it. “We’re looking to harness the collective power of early adopters as a test group to do it,” Tidball says. “We believe that between them they’re likely to discover things that we simply don’t know. It brings massive scale to our ability to experiment with the material to see what it can do.”

“Our view is that wearable technology will become increasingly invisible over the next 10 to 20 years,” Tidball explains. “Instead of wearing it over your eyes or on your wrist, it will be embedded as clothing and tech simply merge. We think graphene’s ability to conduct heat and power and withstand insane forces, while adding zero mass, should make it central to the story. And when clothing can start conducting heat and electricity all sorts of cool things can start happening. It means that over the next decade your clothing can start to become a platform for other innovations. And that’s really what we’re interested in.”

In February 2017, Directa Plus announced that Colmar, the high-end sportswear company, launched a new collection of ski jackets containing the Company’s graphene-based products.