» A new method to control electrons in graphene may open...

Scientists at Rutgers University-New Brunswick have found a way to control the electrons in graphene, paving the way for the ultra-fast transport of electrons with low loss of energy in novel systems. "This shows we can electrically control the electrons in graphene," said a professor in Rutgers' Department of Physics and Astronomy. "In the past, we couldn't do it. This is the reason people thought that one could not make devices like transistors that require switching with graphene, because their electrons run wild." 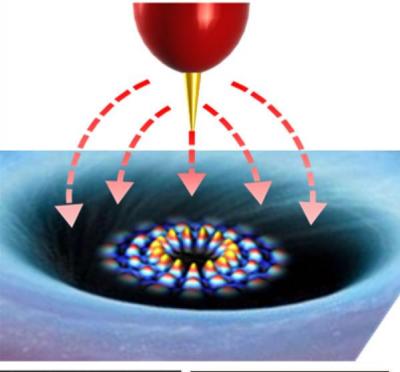 This new work might make it possible to realize a graphene nano-scale transistor, the team said, which would be an important step towards an all-graphene electronics platform. The team managed to control electrons by sending voltage through a microscope with an extremely sharp tip, also the size of one atom, which offers 3-D views of surfaces at the atomic scale. The microscope's sharp tip creates a force field that traps electrons in graphene or modifies their trajectories, similar to the effect a lens has on light rays. Electrons can easily be trapped and released, providing an efficient on-off switching mechanism, according to the team.

"You can trap electrons without making holes in the graphene," the researchers said. "If you change the voltage, you can release the electrons. So you can catch them and let them go at will."

The next step would be to scale up by putting extremely thin wires (nanowires) on top of graphene and controlling the electrons with voltages, the team said.