Applied Graphene Materials, in a recent update, said it made "significant progress" in all of its core markets of composites, coatings, oils and lubricants. Among the reported highlights of its work is its graphene-enhanced epoxy prepreg system MTC9800 to be shown at the JEC World exhibition later this month, after a year and half collaboration with SHD Composites.

In addition, the company has recently completed the first phase of a development project investigating the application of its graphene for resin infused Aerospace structures. During 2016 it continued work on its development program with Airbus Defence and Space, a division of Airbus Group SE, although details of this work are still subject to a non-disclosure agreement.

The graphene oxide-based materials are lamellar carbon compounds with the approximately 1nm thickness and the company expects them to be suitable for various functional materials, such as lubricants, water treatment membranes, and catalysts. Nippon Shokubai stated that it has resolved various problems relating to chemical reactions of the production process and succeeded in the mass production test by utilizing its control technology for stable proceeding of chemical reactions in collaboration with Okayama University which retained academic knowledge about reaction mechanism of graphene oxide.

Haydale will initially supply an R&D reactor (HT60) and a larger capacity reactor (HT200) to GK for use under the Agreement. The initial contract value for the supply of the reactors is payable to Haydale on the normal machine supply basis. Subject to reaching the agreed milestones, the majority of the revenue is scheduled to be received in the current financial year and is expected to constitute a significant proportion of the Group’s revenues for the year ended 30 June 2016.

Researchers at Northwestern University targeted the problem of fuel waste in automobiles due to friction, and tested crumpled graphene balls as a lubricant additive. In a series of tests, oil modified with crumpled graphene balls outperformed some commercial lubricants by 15%, both in terms of reducing friction and the degree of wear on steel surfaces.

Crumpled graphene balls are a novel type of ultrafine particles that resemble crumpled paper balls. The particles are made by drying tiny water droplets with graphene-based sheets inside. The scientists explain that capillary force generated by the evaporation of water crumples the sheets into miniaturized paper balls, just like how we might crumple a piece of paper with our hands.

Applied Graphene Materials has entered into a joint development agreement with German lubricants and oils business Puralube Germany (which will be shortly changing its name to Puraglobe).

NanoChem says that they anticipated the decline in revenues "in line with the overall rationalization of the business to a suite of higher margin products and offerings". Following the collapse in oil prices, Nanochem exited the capital intensive low margin fuel additives business.

Graphene Nanochem reported their financial revenues for 2014, with revenues of £48.3 million - up 53% from 2013, mostly due to contracted sales to Shell and Chevron.

Operating loss for 2014 was £6.8 million (down from £10.1 million), but the company reports a gross profit of £1.6 million - despite a feedstock price anomaly for the year. Delays in the roll out of graphene-based products are to be blame for the operating loss.

IBM researchers designed a method to estimate and measure friction in various materials. The method allows the scientists to mechanically measure the tension and friction of two sliding sheets of graphite,  something that has been previously poorly understood and theory-based. The team also derived a mathematical expression to illustrate what they were seeing in an atomic force microscope (AFM), which turned out to be in agreement with theoretical models. 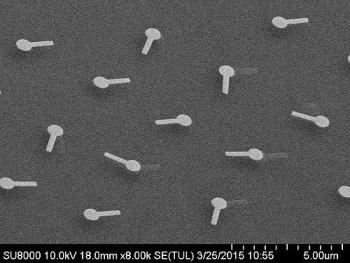 The scientists discovered that the friction is randomly determined in nature and directly based on the interaction between the proportionate lattices of the material, in this case graphite. A conversation with one of the researchers revealed that since the study focused on the facial aspects of the graphite, it is his belief that it would also apply for graphene, but this will require further inquiry.

Recent news from NanoXplore successful $2.7M financing round, launch of their three tonnes/year production facility have positioned the company as a leading graphene company, and certainly a major player in North America.

The core of the company appears to be their production process, developed in-house. In addition to large capacity, they claim it creates very high quality (low defect) graphene, functionalized during production to facilitate mixing (dispersion) with a broad range of industrial materials. The range of products shows not only high quality graphene powders, but also a couple of unique offerings. Interestingly, they seem open to licensing their production technology.

The graphene producer and application developers hopes that these new investors will provide more than just funds - also knowledge and connection in target markets. NanoXplore aims to use the money to accelerate their customer acquisition and sales efforts. The company has seen a strong interest in their products over the last year, especially for applications in smart textiles and Li-ion batteries, as well as lubricants, paints, and polymers.