Graphene, a sheet of carbon atoms bound together in a honeycomb lattice pattern, is hugely recognized as a “wonder material” due to the myriad of astonishing attributes it holds. It is a potent conductor of electrical and thermal energy, extremely lightweight chemically inert, and flexible with a large surface area. It is also considered eco-friendly and sustainable, with unlimited possibilities for numerous applications. 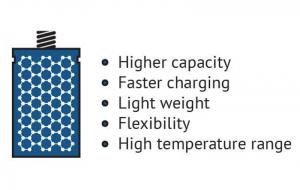 The advantages of graphene batteries

In the field of batteries, conventional battery electrode materials (and prospective ones) are significantly improved when enhanced with graphene. A graphene battery can be light, durable and suitable for high capacity energy storage, as well as shorten charging times. It will extend the battery’s life, which is negatively linked to the amount of carbon that is coated on the material or added to electrodes to achieve conductivity, and graphene adds conductivity without requiring the amounts of carbon that are used in conventional batteries.

Graphene can improve such battery attributes as energy density and form in various ways. Li-ion batteries (and other types of rechargeable batteries) can be enhanced by introducing graphene to the battery’s anode and capitalizing on the material’s conductivity and large surface area traits to achieve morphological optimization and performance.

It has also been discovered that creating hybrid materials can also be useful for achieving battery enhancement. A hybrid of Vanadium Oxide (VO2) and graphene, for example, can be used on Li-ion cathodes and grant quick charge and discharge as well as large charge cycle durability. In this case, VO2 offers high energy capacity but poor electrical conductivity, which can be solved by using graphene as a sort of a structural “backbone” on which to attach VO2 - creating a hybrid material that has both heightened capacity and excellent conductivity.

Another example is LFP (Lithium Iron Phosphate) batteries, that is a kind of rechargeable Li-ion battery. It has a lower energy density than other Li-ion batteries but a higher power density (an indicator of of the rate at which energy can be supplied by the battery). Enhancing LFP cathodes with graphene allowed the batteries to be lightweight, charge much faster than Li-ion batteries and have a greater capacity than conventional LFP batteries.

In addition to revolutionizing the battery market, combined use of graphene batteries and graphene supercapacitors could yield amazing results, like the noted concept of improving the electric car’s driving range and efficiency. While graphene batteries have not yet reached widespread commercialization, battery breakthroughs are being reported around the world.

Batteries serve as a mobile source of power, allowing electricity-operated devices to work without being directly plugged into an outlet. While many types of batteries exist, the basic concept by which they function remains similar: one or more electrochemical cells convert stored chemical energy into electrical energy. A battery is usually made of a metal or plastic casing, containing a positive terminal (an anode), a negative terminal (a cathode) and electrolytes that allow ions to move between them. A separator (a permeable polymeric membrane) creates a barrier between the anode and cathode to prevent electrical short circuits while also allowing the transport of ionic charge carriers that are needed to close the circuit during the passage of current. Finally, a collector is used to conduct the charge outside the battery, through the connected device. 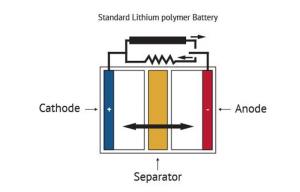 When the circuit between the two terminals is completed, the battery produces electricity through a series of reactions. The anode experiences an oxidation reaction in which two or more ions from the electrolyte combine with the anode to produce a compound, releasing electrons. At the same time, the cathode goes through a reduction reaction in which the cathode substance, ions and free electrons combine into compounds. Simply put, the anode reaction produces electrons while the reaction in the cathode absorbs them and from that process electricity is produced. The battery will continue to produce electricity until electrodes run out of necessary substance for creation of reactions.

Batteries are divided into two main types: primary and secondary. Primary batteries (disposable), are used once and rendered useless as the electrode materials in them irreversibly change during charging. Common examples are the zinc-carbon battery as well as the alkaline battery used in toys, flashlights and a multitude of portable devices. Secondary batteries (rechargeable), can be discharged and recharged multiple times as the original composition of the electrodes is able to regain functionality. Examples include lead-acid batteries used in vehicles and lithium-ion batteries used for portable electronics.

Batteries come in various shapes and sizes for countless different purposes. Different kinds of batteries display varied advantages and disadvantages. Nickel-Cadmium (NiCd) batteries are relatively low in energy density and are used where long life, high discharge rate and economical price are key. They can be found in video cameras and power tools, among other uses. NiCd batteries contain toxic metals and are environmentally unfriendly. Nickel-Metal hydride batteries have a higher energy density than NiCd ones, but also a shorter cycle-life. Applications include mobile phones and laptops. Lead-Acid batteries are heavy and play an important role in large power applications, where weight is not of the essence but economic price is. They are prevalent in uses like hospital equipment and emergency lighting.

Lithium-Ion (Li-ion) batteries are used where high-energy and minimal weight are important, but the technology is fragile and a protection circuit is required to assure safety. Applications include cell phones and various kinds of computers. Lithium Ion Polymer (Li-ion polymer) batteries are mostly found in mobile phones. They are lightweight and enjoy a slimmer form than that of Li-ion batteries. They are also usually safer and have longer lives. However, they seem to be less prevalent since Li-ion batteries are cheaper to manufacture and have higher energy density.

While there are certain types of batteries that are able to store a large amount of energy, they are very large, heavy and release energy slowly. Capacitors, on the other hand, are able to charge and discharge quickly but hold much less energy than a battery. The use of graphene in this area, though, presents exciting new possibilities for energy storage, with high charge and discharge rates and even economical affordability. Graphene-improved performance thereby blurs the conventional line of distinction between supercapacitors and batteries. 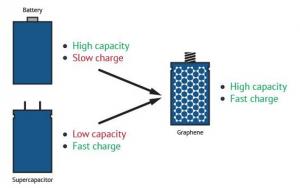 Graphene batteries combine the advantages of both batteries and supercapacitors

Graphene-based batteries have exciting potential and while they are not yet fully commercially available yet, R&D is intensive and will hopefully yield results in the future. Companies all over the world (including Samsung, Huawei, and others) are developing different types of graphene-enhanced batteries, some of which are now entering the market. The main applications are in electric vehicles and mobile devices.

Some batteries use graphene in peripheral ways - not in the battery chemistry. For example in 2016, Huawei unveiled a new graphene-enhanced Li-Ion battery that uses graphene to remain functional at higher temperature (60° degrees as opposed to the existing 50° limit) and offer a double the operation time. Graphene is used in this battery for better heat dissipation - it reduces battery's operating temperature by 5 degrees. 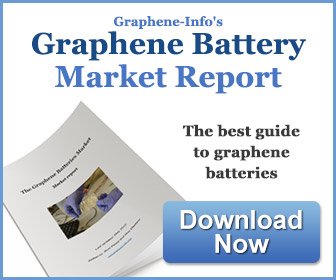 KAUST researchers have found that a layer of hierarchically three-dimensional porous graphene can greatly suppress polysulfide shuttling - a problem known to be holding back the development of lithium-sulfur batteries. This could potentially help create high-density batteries that are useful for various applications, like electric vehicles and more. 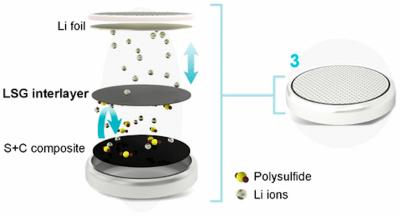 Li-S batteries have several potential advantages over the most commonly used types of batteries. They have a higher theoretical energy storage capacity and sulfur is a nontoxic element readily available in nature. Sulfur is also a waste product of the petrochemical industry, so it could be obtained relatively cheaply while increasing the sustainability of another industry.

Graphene Manufacturing Group (GMG) has announced that it will join the Future Battery Industries Cooperative Research Centre (“CRC“) for battery electrolytes development along with various organizations and universities.

The CRC’s objective is to develop advanced electrolyte systems that improve battery performance. The project will run over a period of 4 years with GMG providing a source of graphene and personnel time to the project.

CPI and Thomas Swan have teamed up with Johnson Matthey (JM), a company focused on sustainable technologies, to explore how to best optimize battery technology using graphene and CNTs.

The ICE-Batt project receives funding support from the Faraday Battery Challenge, managed by Innovate UK – the UK’s innovation agency – to enable the investigation of how innovative carbon nanotubes (CNTs) and graphene nanoplatelets (GNPs) can improve battery performance. In addition, the project will explore how to improve the green credentials of battery processing.

This is a sponsored post by The Graphex Group

The Graphex Group Ltd (GRFXY listed on OTCQX), a leading developer of graphene products and technologies and a manufacturer of spherical graphite and graphene technology for the renewable energy sector, has set up an indirect wholly-owned subsidiary, Heilongjiang Province Graphex New Material Technology Company Limited (“HLJ Province Graphex”) at Qitaihe City of the Heilongjiang Province of China.

Graphex's manufacturing facility for spherical graphite is strategically located in Heilongjiang Province, which is rich in high-quality natural graphite reserves. Once HLJ Province Graphex’s new production facility is fully online, the company expects to increase annual production by 30,000 tons to a total of 40,000 tons.