Last week Barcelona hosted the Mobile World Congress trade show, and it was a very large and impressive conference - with over 100,000 visitors and thousands of exhibiting companies. This year the MWC included a graphene pavilion, organized by the ICFO and the Graphene Flagship, Europe's $1 billion research project initiative.

The Graphene Pavilion was very impressive, with several companies showcasing real graphene products and prototype devices, and also several research groups from leading Universities. The Pavilion consisted of 11 companies and 9 research centers - and you could see graphene materials, graphene supercapacitors (From Zap&Go, soon to hit the market), large graphene EMI shielding films (from GNext), graphene sensors and graphene-based RFID tags and antennas. In the photo below you can see an air quality prototype sensor made from graphene developed by Libre SRL (PiAndBi). 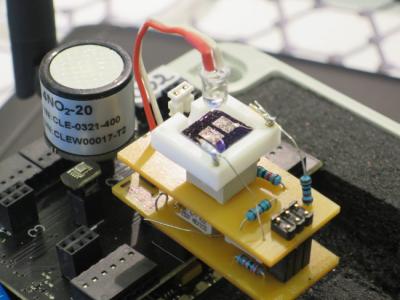 We visited the Pavilion several times, and it was always busy and packed with visitors. The press was very interested and we understood that there were over 70 interviews done during the conference. This was a great opportunity to showcase graphene's potential and expose the new material and technologies to a wider audience - and it seemed that altogether the organizers did a very good job!

We talked to some of the visitors at the Pavilion, and they seem to understand that graphene has a huge potential. However we feel that the display and keynote were somewhat too technical for the wide audience and were focused on specific graphene applications and production methods. It may have been a bit better to focus most of the attention on graphene's potential applications and taking the wider view, as the main point in such an event is to expose graphene to people that have never heard of this material. 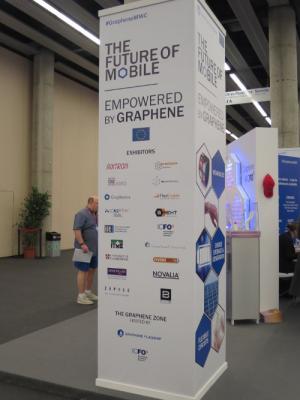 From our talks during the event, it seemed that both the GSMA (the event organizers) and the graphene flagship were pleased with the event outcome, and the Graphene Pavilion will also be hosted at the MWC Shanghai event later this year, and will also be part of MWC 2017.

We will soon post more detailed posts regarding some of the companies and products on display. Stay tuned!