Talga Resources has provided an update on initial benchmark testing of its graphene in Lithium-ion batteries, manufactured at the Warwick Manufacturing Group’s Energy Innovation Center, University of Warwick UK. 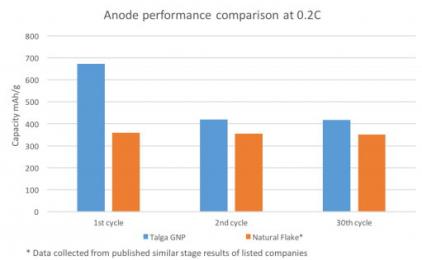 Talga stated that the test results demonstrated that not only does its GNP anode performance prove equal or better than similar graphene testing results found in literature, but also show performance that substantially exceeds that of typical spherical or synthetic graphite that comprise of highly processed materials. This is significant as the Talga material was not optimized and received minimal processing and no coatings prior to testing.